A China Construction Bank branch on Kiukiang Road, Shanghai, is being touted as the first “unmanned bank” on the Chinese mainland with its opening on April 9, 2018, reports the Shanghai Observer. 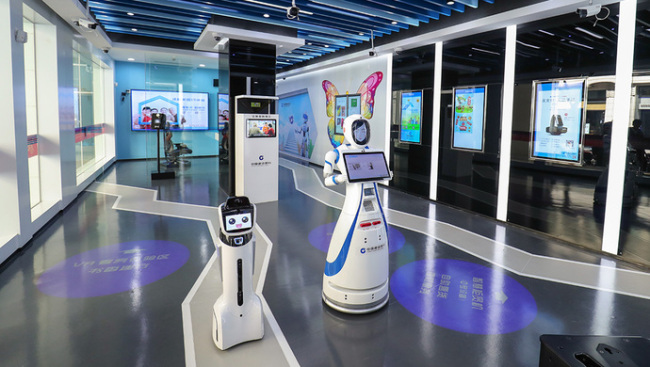 Instead of being approached by human personnel, the bank foyer is staffed by a robot, which serves as the bank lobby manager, and is able to communicate with customers to meet their needs and solve their problems.

The difference between a traditional self-service bank and the unmanned bank is the intelligent self-service equipment which is able to access various banking services within the branch.

Customers at the Kiukiang CCB branch have access to video teller machines, currency exchange machines, as well as interactive services including Augmented Reality and Virtual Reality. The self-service equipment can handle over 90% of the cash and cashless services of a traditional bank.

However, despite the term “unmanned bank,” the Kiukiang CCB branch does still maintain a human staff.

Welcome to WordPress. This is your first post. Edit or delete it, then start writing!
Read More

How intelligent automation will improve our jobs and our companies

Today, automation tools are largely isolated and segmented into their own fiefdoms. A website chatbot doesn’t typically interact with a customer service employee unless it is programmed to hand off a conversation if certain conditions are met.

RPA has been shaped by three main categories: screen scrapping, workflow automation and artificial intelligence. Screen scarping is the process of collecting display data from legacy applications so that data can be displayed by more user interface.

When a perfect storm of issues hit Ricoh Italia, Director of Customer Service Andrea Gombac knew it was time to make a change. Their parent Ricoh organization was moving all service processes to the Siebel CRM. And while they were ready for a change, they had fine-tuned their previous system making it hard to part with—especially realizing the work it would take to get the new CRM system to support their preferred process for handling customer requests.

"Unmanned bank" makes debut in Shanghai A China Construction Bank branch on Kiukiang Road, Shanghai, is being touted as the first "unmanned bank" on the Chinese mainland with its opening on April 9, 2018, reports the Shanghai Observer.   Instead of being...
Read More

After the introduction of unstaffed convenience stores and cashier-less karaoke booths, self-service bank branches now look like they are becoming a reality.

Any cookies that may not be particularly necessary for the website to function and is used specifically to collect user personal data via analytics, ads, other embedded contents are termed as non-necessary cookies. It is mandatory to procure user consent prior to running these cookies on your website.